Roundtable on Violence Against Women – Dismantled 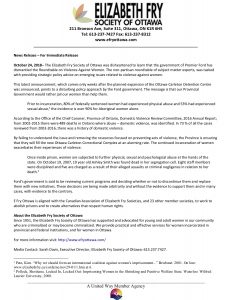 The Elizabeth Fry Society of Ottawa was disheartened to learn that the government of Premier Ford has dismantled the Roundtable on Violence Against Women. The non-partisan roundtable of subject matter experts, was tasked with providing strategic policy advice on emerging issues related to violence against women.

This latest announcement, which comes only weeks after the planned expansion of the Ottawa-Carleton Detention Centre was announced, points to a disturbing policy approach by the Ford government. The message is that our Provincial Government would rather jail our women than help them.

Prior to incarceration, 80% of federally sentenced women had experienced physical abuse and 53% had experienced sexual abuse,1 the incidence is over 90% for Aboriginal women alone.

According to the Office of the Chief Coroner, Province of Ontario, Domestic Violence Review Committee, 2016 Annual Report; from 2002-2015 there were 489 deaths in Ontario where abuse – domestic violence, was identified. In 73 % of all the cases reviewed from 2003-2016, there was a history of domestic violence.

By failing to understand the issue and removing the resources focused on preventing acts of violence, the Province is ensuring that they will fill the new Ottawa Carleton Correctional Complex at an alarming rate. The continued incarceration of women exacerbates their experiences of violence.

Once inside prison, women are subjected to further physical, sexual and psychological abuse at the hands of the state. On October 19, 2007, 19 year old Ashley Smith was found dead in her segregation cell. Eight staff members were disciplined and five are charged as a result of their alleged assaults or criminal negligence in relation to her death.2

Ford’s government is said to be reviewing current programs and deciding whether or not to discontinue them and replace them with new initiatives. These decisions are being made arbitrarily and without the evidence to support them and in many cases, with evidence to the contrary.

E Fry Ottawa is aligned with the Canadian Association of Elizabeth Fry Societies, and 23 other member societies, to work to abolish prisons and to create alternatives that respect human rights.

About the Elizabeth Fry Society of Ottawa

1 Pate, Kim. “Why we should form an international coalition against women’s imprisonment…” Brisbane: 2001. On line: www.elizabethfry.ca/confernc/nov29-01/1.htm at 6.
2 Pollock, Shoshana. Locked In, Locked Out: Imprisoning Women in the Shrinking and Punitive Welfare State. Waterloo: Wilfred Laurier University, 2008.

This site uses Akismet to reduce spam. Learn how your comment data is processed.

The Elizabeth Fry Society of Ottawa